All about our facilities

The Seething Observatory sits on a 2 acre site at the edge of Seething Airfield in South Norfolk. Based just 8 miles south of Norwich in the middle of the countryside, visitors and members can enjoy stunning dark, star filled skies.

Since the Society moved to Seething in 1994 significant progress has been made to enhance the look of the site but not at the expense of the local wildlife. To that end, most of the observatory facilities are on one half of the site, surrounded by lawns and footpaths, whilst the other half is for the most part, left as a managed wildlife area. In the last few years we have extended our level of biodiversity management and have produced on-site information posters.

In addition to developing the look of the site, we have replaced the gravel paths that led around the various buildings with concrete paths to ensure that people less stable on their feet or those in wheelchairs can move safely around the site. This coupled with some newly installed low-level red lights, ensure members and public visitors to the Observatory enjoy the facilities in complete safety.

Owing to the level of wildlife present on site people are warned that the ground surface (apart from areas concreted or under tarmac) is likely to be uneven. Rabbits regularly dig new holes in the grass, gravel and roadways in search of roots.

Society activities centre around the Clubhouse building. Built back in 1994 when the Observatory moved to Seething, this building is an ideal place for members to share experiences and to chat in a warm, friendly environment.

The building consists of a kitchen with tea and coffee making facilities. To the other side of the main room, there is a smaller room currently used used by Society members as a recreation room. 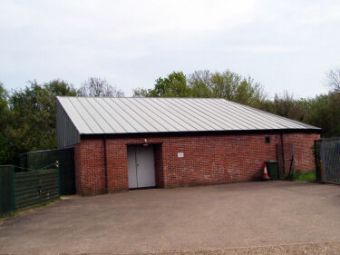 The main room, referred to as the ‘clubroom’ is where members gather on the Society evenings to chat and share experiences. It provides a warm and relaxed environment where Society members can mingle and glean that much support and needed advice.

On public open evenings, which take place during our astronomical season, the clubroom is changed into a lecture theatre, seating approximately 40 visitors. Using the latest in digital projectors, the lectures cover subjects from Historical Astronomy all the way through to Black Holes and the End of the Universe.

The Genesis Dome is home to a 40.64 cm (16″) Meade LX200 Schmidt-Cassegrain telescope. The telescope is fully computer controlled, which means you don’t need to know where an object is to find it. The computer will find it for you from its database of over 64,000 objects. This makes it great for beginners to see many more objects than they would normally see. The telescopes large size means it can see objects much fainter than the human eye, offering views of galaxies so distant that it has taken millions of years for the light to reach us. 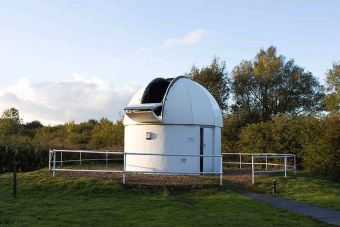 The dome itself is approximately 4 metres across and sits on top of a circular wall some 2m above the ground. The dome shutter opens up to give viewers a window on the sky and a powerful motor turns the dome around to allow access to any part of the sky.

The Genesis Dome and telescope was installed back in 2002 as part of the Genesis Project, which cost £15,000 to complete. Many organisations donated funds to the project. As part of the Seething Observatory Upgrade project, the dome was refurbished and a new drive motor installed in the summer of 2021.

The Herschel Dome is one of the oldest Society buildings. It was a popular part of the Observatory when it 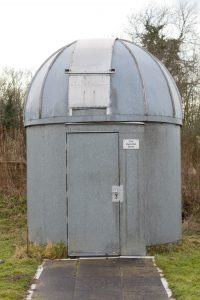 was based at Colney Lane on the outskirts of Norwich but an arson attack rendered it unsafe to use for many months.

The Dome houses a 203 mm (8″) STF Mirage Super 8 Maksutov-Cassegrain telescope, with a focal length of 2000 mm, that provides our members and visitors with stunning high-resolution planetary and lunar views. 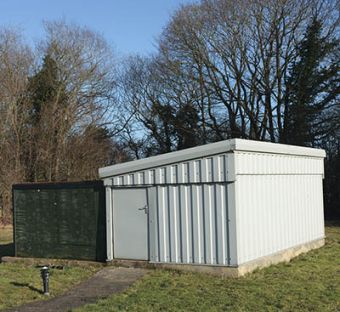 A number of members have their own telescopes and regularly bring them to Seething to observe amongst friends under the dark Seething skies. The Society also has a small store of telescopes that can be used by members.

The site has 16 concrete pads, 6 at one end and 10 at the other; where members can stand their own telescopes to observe with. The 4 of the pads at the far end of the site and 4 at the near end, have electricity points allowing for computer controlled telescopes to be plugged in. 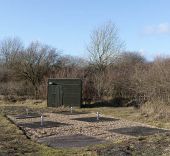 For those members wishing to use their own telescopes for imaging, we have two run-off observatories which are designed to prevent the light pollution from laptops disturbing visual observers on the nearby pads. They too have an electricity supply allowing connection for laptops, telescope drives and imaging systems. 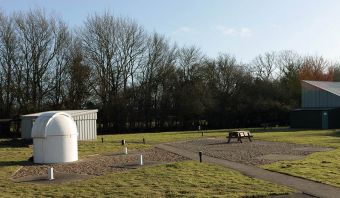 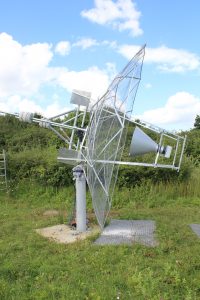 dished were installed at the far end of site. However, after a number of year inactivity these were removed and scrapped. Later a group installed a monopole antenna called the “Washing Line” by the clubhouse. This was designed and used to detect the radio emissions from Jupiter, as the moon Io passes through the magnetosphere of the planet causing violent electrical storms. This was dismantled when the Cabin was installed.

In 2018 a new project to re-introduce Radio Astronomy capability to the Society began. The intent being to set up a 4 m geodesic parabolic dish reflector along with a Hydrogen line detector. Hydrogen atoms are widespread throughout the Milky Way galaxy, especially within the spiral arms. The electron in these atoms can undergo a spin reversal process which emits a photon of electromagnetic radiation in the radio frequency at 1420 MHz. Owing to the sheer number of hydrogen atoms within the clouds or nebulae present in the spiral arms these signals are detectable with suitable equipment.

The 4 m parabolic Radio dish is designed to collect signals from space and reflect them back to a feedhorn which guides the radio waves down to a monopole detector near the end. The signals are then ready to be collected, amplified and analysed.

The current version of the dish is the third installed and has the feedhorn securely mounted on the main axle of the dish. Experience with the previous versions demonstrated that when the feedhorn is attached to the dish itself, the weight of the feedhorn, together with leverage and wind sheer caused the dish shape to distort significantly.

Anyone wishing to learn something new, practice their skills or simply learn how to observe in Radio Astronomy are welcome to get involved. 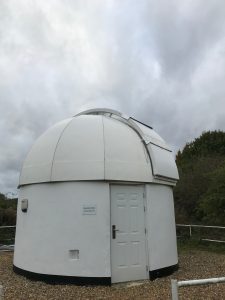